Written and reviewed by the NatureClaim Team


See what others say about Chameleon Plant: 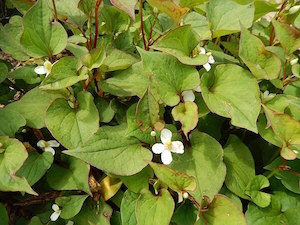 Chameleon plant (Houttuynia cordata) is also known as fish mint due to its fish-like smell. This plant is widely distributed in Southeast Asia. In Vietnamese cuisine, it is often used as a vegetable. During the 2002 – 2004 Severe Acute Respiratory Syndrome (SARS) outbreak, human clinical trials studied the anti-viral properties of this medical plant.


Side Effects
Side effects may include: Precautions and Adverse Events: [5]

There is not enough research on the use of supplements containing chameleon plant during pregnancy and breast-feeding, so consult a licensed healthcare practitioner before use or avoid use.

Chameleon plant is not a "drug", the best doses have not been thoroughly established. Make sure to follow the specific product instructions and take as directed on the label or consult a licensed healthcare practitioner before use.